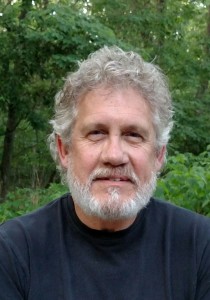 Three teen deer have begun of late
to make daily dusk-time stops out back,
their flat flanks and thick, angled necks
depicting stumps and trunks that then
move and materialize and re-blend
as their busy muzzles forage-and-
freeze them across the far lawn. How
ever inventive their camouflage. Of course,
once I look up, so do they, slightly
white faces and twice-twitching ears
alert to any budge. And if I stand,
even gradually as a yogi, they hop
and spin and crash backward into
slits that open in the brush and oaks
that just as quickly close behind them.
I’m showing you nothing you don’t
know, and know you also know that
doesn’t matter, that you, too, would stop,
lift your face, and love them every time.

D.R. James—born in Ohio, raised in Illinois, grad-schooled in Iowa, and now in his 34th year teaching writing, literature, and peacemaking at the Midwestern college he attended in the 70’s—lives in the woods outside Saugatuck, Michigan. His latest of seven collections is If god were gentle (Dos Madres).

Guest Editor Roy J. Beckemeyer is from Wichita, Kansas. He was President of the Kansas Authors Club 2016-2017. His latest book of poetry, Stage Whispers (Meadowlark-Books, 2019), contains “…handsomely crafted poems…Dense with images, intimate and honest…” (Kathryn Kysar). His chapbook, Amanuensis Angel (Spartan Press, 2018) comprises ekphrastic poems inspired by a variety of artists’ depictions of angels. His first poetry collection, Music I Once Could Dance To (Coal City Press, 2014), was a 2015 Kansas Notable Book. He recently co-edited Kansas Time+Place: An Anthology of Heartland Poetry (Little Balkans Press, 2017) with Caryn Mirriam Goldberg. That anthology collected poems that appeared on this website from 2014-2016.