Thunder fills everyone standing with dread, but lightning
cracks the air, opens us to all the sky’s murderous powers.

Beside a propane tank behind my studio, at the edge
of an overgrown gravel drive, sway black-eyed Susans and lacy wildflowers.

Strong black coffee punctuates overcast mornings.
Cigarettes are good, too, but I don’t smoke those anymore.

Last week, chatted with an old and dear friend who’s writing a book
on “The History of Reading” that I want to devour.

He told me it’s cancer. He told me the executor of his will
will send me his lifetime’s book collection of analysis and verse.

I do not want my friend to die and neither do I want to end.
I am exhausted from saying goodbye, yet here we are. 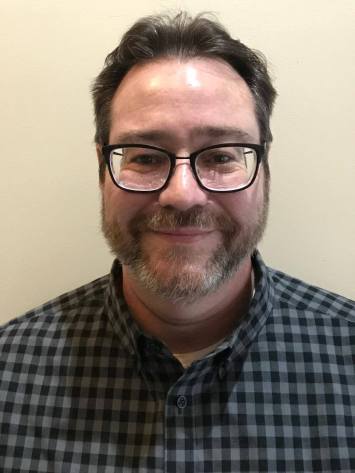 Shawn Pavey is the author of Talking to Shadows (2008, Main Street Rag Press), Nobody Steals the Towels from a Motel 6 (2015, Spartan Press), and Survival Tips for the Pending Apocalypse (Spartan Press, 2019). He is a Co-founder and former Associate Editor of The Main Street Rag Literary Journal, and a former board member and officer of The Writers Place, a Kansas City-based literary non-profit.

September Editor James Benger is the author of two fiction ebooks, and three chapbooks, one full-length, and coauthor of three split books of poetry. He is on the Board of Directors of The Writers Place and the Riverfront Readings Committee, and is the founder of the 365 Poems In 365 Days online workshop, and is Editor In Chief of the subsequent anthology series. He lives in Kansas City with his wife and children.