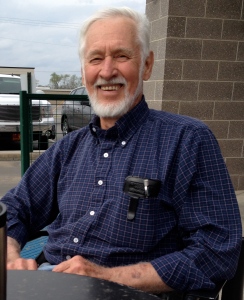 Egret surveys his paddy,
notes how well it fills and drains.
Egret has a good farmer,
not a jog in hundreds
of green rows, rice sprouts
three beaks’-lengths high
over sheen of mud and water.
Farmer’s back aches from the toil,
but farmers’ backs always ache.
Egret is arcs and angles
lettered white on green-lined mud.
He bends in the paddy’s center,
conscious that he is cursive,
an alphabet of one; finds a morsel,
straightens, cocks his head toward
the highway roar, to his readers.

Roland Sodowsky grew up on a small ranch in western Oklahoma.  He has three degrees from Oklahoma State University and studied Old High German as a Fulbright Scholar in Germany.  He has taught linguistics, literature, and creative writing at OSU, the University of Calabar in Nigeria, the University of Texas, Sul Ross State University, and Missouri State University. He has published poetry, short stories, or novellas in Atlantic Monthly, American Literary Review, Glimmer Train, Midwest Quarterly, and many other literary magazines.  His collection of short stories, Things We Lose (U. Missouri Pr), won the Associated Writing Programs’ Award for Short Fiction.  He received the National Cowboy Hall of Fame Short Fiction Award for Interim in the Desert (TCU Pr), the Coordinating Council of Literary Magazines-General Electric Award for fiction, and has been a recipient of a National Endowment for the Arts award.  Now retired from Missouri State, he and his wife, the poet Laura Lee Washburn, live in Pittsburg, Kansas when he, his brother, and his son are not engaged in a continuing battle with the mesquites and cedars on their family homestead.

Monthly Editor Melissa Fite Johnson’s first collection, While the Kettle’s On (Little Balkans Press, 2015), won the Nelson Poetry Book Award and is a Kansas Notable Book. She is also the author of A Crooked Door Cut into the Sky, winner of the 2017 Vella Chapbook Award (Paper Nautilus Press, 2018). Her poems have appeared in Valparaiso Poetry Review, Broadsided Press, Whale Road Review, and elsewhere. Melissa teaches English and lives with her husband and dogs in Lawrence, Kansas.