The House with the Mansard Roof by Eve Ott 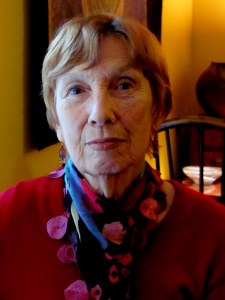 before gently pushing it open.

Her face could have lit a dark space when she saw me.

She hugged me tight, pulled back, lit up again, then

hugged me some more.

Her walls are covered with mandalas, all the same,

each different, that she has colored. Canisters of

colored pencils sit on each of two small tables.

You must have the most beautiful room on the floor, I say.

I do, she says. Mandalas.

We go out for lunch. Turns out Newton, Kansas has some

wonderful old houses. She keeps pointing out the

ones with mansard roofs.

Remember, she says to me, remember how we used to…

But the thoughts drifts off, so I study the roofs, and, yes,

there were such in Emporia, Kansas, where we were

unlikely classmates in graduate school, she so young

and willowy, I a staggering newly single mother of two.

She points to another mansard house. Remember? She says.

Yes! Remember how we saw them, those ghosts? Remember?

And I do. I remember how we walked around town,

told each other tales, most always cynical, humorous,

self mocking, sometimes licentious and most often

centered around the house with the mansard roof.

Good, she says, Good for you. And remember we kind

of joked a little, and we wrote, didn’t we? We wrote

Well, we shouldn’t have laughed, you know. They are

there, those ghosts. And they are very very lonely.

Eve Ott loves the Kansas City writing community and has been writing up a storm since she retired there in 2007. Her collection Album from the Silent Generation was released last year by Aldrich Press. Eve has poems in several anthologies.

Ronda Miller enjoys wandering the high plateau of NW Kansas where the Arikaree Breaks whisper late into the sunset and scream into blizzards and thunderstorms. She lives in Lawrence close to her son and daughter. She is a district president and the state vice president for Kansas Authors Club. She is a life coach specializing in working with those who have lost someone to homicide. She dances every chance she gets. She has poetry in numerous online and hard copy publications that include The Smithsonian Institute. Two books of poetry include Going Home: Poems from My Life and MoonStain (Meadowlark Books, May 2015).

Twenty by by Megan Kaminski

Comments on: "The House with the Mansard Roof by Eve Ott" (4)